After a while of wanting absolutely zero straight men looking at me, of hiding any signs of femininity in the hopes that I’ll be perceived as neutral… after all that, I’ve been dating someone who presents butch but celebrates femininity. She makes me feel good and strong and hot, like of COURSE I should be myself! Duh!

Here’s what I feel I most identify with:

This is one of the cutest stories ever. This man has been in the news before, which only goes to show how rare it is that someone cross-dresses so freely, even in today’s accepting world. Though this isn’t about gender identity perse (and in fact, it’s perhaps his cis-gendered identity that makes him a topic of conversation), this is still about someone overcoming a lot of external pressure to conform, with the support of his wife who stuck by his side.

If you don’t love the crap out of both of them after this, then I don’t know… do you not have a soul maybe? Get that checked.

Choice of life partner is important. Wait but why?, an awesome blog on a whole variety of subjects, discusses this here and here. But if you can’t love yourself first, you’ll never love at all.

Ever since Tina said “duderuses” on Bob’s Burgers I decided to use it all the time.

I won’t tell you what time of the month it is because this is the internet but I’m eating a lot of chocolate and I feel fat and I’m turning into a monster, as all duderus-containing people are wont to do. We are all chocolate-eating fat-pants-wearing weepy messes for a whole week. RIGHT?! JKJK.

But seriously this chocolate is great. And I’m not wearing my fat pants but I’m wearing a big fuzzy hoodie. And I’m NOT TURNING INTO A MONSTER OKAY!?!

But seriously. I’m not eating chocolate. Even though it is great.

You know what else is great? The environment. In an effort to protect it, I use a bunch of hippie things. I used to have a Diva Cup, but it didn’t ever work quite right for me, and when I couldn’t get the stem clean (it’s a hollow tube thing) I wound up tossing it because I’d been using it for 5 years and that is approximately a LOT in tampon years, so it did its part. So now I have the Lunette. It’s a bluish color, no hollow stem, and it fits my anatomy pretty well. And it came in a blue bag instead of a magenta floral one… although when it comes to menstrual cups I don’t care if the marketing is cutesy as long as it makes them un-scary enough for more women to want to use them.

I recently discovered this weirdo cup called the Femmycycle that I want to share. It looks like an alien condom slash mini terrarium slash itty bitty gold fish bowl. Has anyone used one of these? Curious! When I’m thru with the Lunette I’m thinking of trying this. Technological innovation in the menstrual cup department makes me SUPER EXCITED because it means people with brains talent money and resources are not afraid of our scary dudterus-having bodies.

Even though I don’t mind frilly marketing if it gets people excited about using reusable menstrual products, I hate pink and white and swirly reusable pads because I have to look at that every time I have to pee. So I found a few for you duderus-having people who want something more gender-neutral, mostly on Etsy, like this navy blue set. 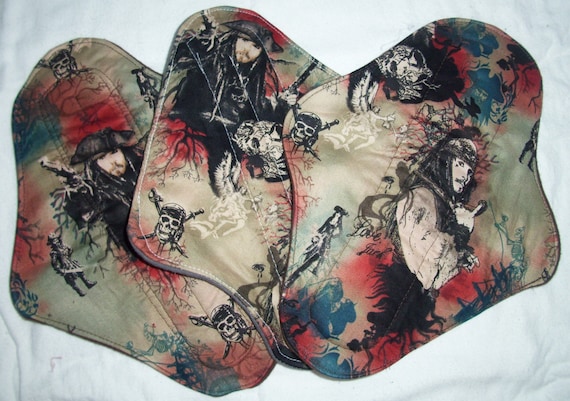 Anime fan? Cupcake fan? Cartoony clouds and paper airplanes? The Wings of Love Etsy shop has so many designs that are NOT pink and floral.

And I can’t resist linking to this one, because everyone loves penguins. Everyone. 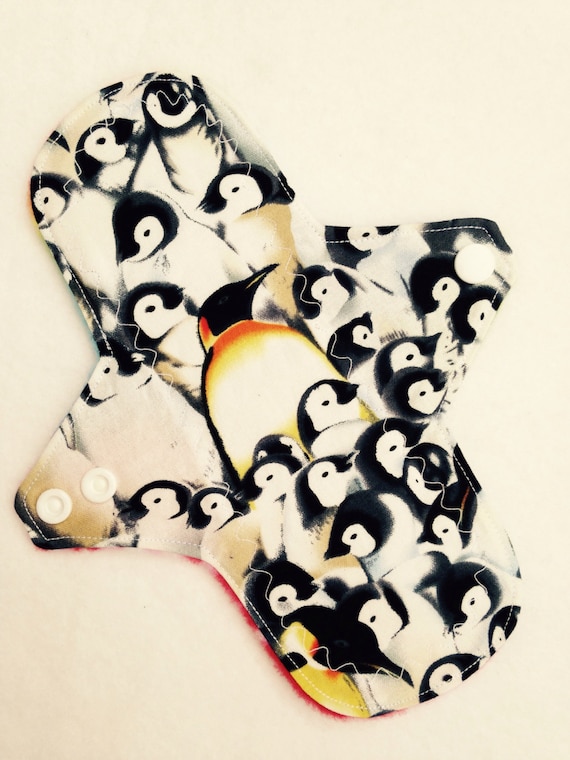 That shop also has themed ones, which I think is going a little too far: I’m having a period, I don’t need to go all Martha Stewart and match my tablecloths to my pads. But maybe YOU want to express your love for thanksgiving or halloween.

Or maybe you hate your duderus and you want it to stop bleeding so to get back at the damn thing, you just want to let loose a bunch of spiders on it! Or spiderMAN! Or skulls and crossbones because everything is the worst!!

Wait. Wait. This… right here… has to be my favorite: a bloodspatter print reusable cloth pad!! I hope they bought the fabric that way…

Anyways these are just some of the ones I like for myself. There are artsy ones, comic ones, cutesy ones, patterned ones. Nothing particularly butch (except for this dapper gingham and this argyle number), but still… Etsy is way better for this stuff than anywhere else I’ve looked.

I wonder how many people will find this post by looking up “duderus”.

This article about boi culture in NYMagazine is a really interesting read. Although this article covers a subculture that’s filling an important niche in the queer world, this article seems very dismissive and negative to me. Let’s see what lovely truth-nuggets this reporter has uncovered for us!

First off it’s funny when reporters delve into a subculture.

Secondly, the ageism here is really interesting, as is the rejection of queer politics while at the same time embodying the very same gender-defiance that was made possible by a previous generation of gender-rule-breaking women/womyn.

Boihood has nothing to do with earth mothers or sisterhood or herbal tea, and everything to do with being young, hip, “sex positive,” a little masculine, and ready to rock.

Some hypothetical questions off the top of my head: Is it a positive thing to have this culture where you no longer have to be militantly political 24/7, this sense that most enemies of LGBT society are vanquished? Or is it an excuse to act like kids even into adulthood because growing up is just too hard? Does it come from a positive environment surrounding LGBT acceptance, or is it a result of a negative youth-oriented age-ist culture? Is it a redefinition of female masculinity in the same way effeminate men redefine masculinity? Or is it brattiness?

As one butch interviewed for the article said:

What’s new is seeing these kids who really seem to be striving for a certain kind of juvenilia, not just masculinity. They really want to be kids. This hit me when I saw this girl—this boi, I guess—barreling out of a store in Chelsea in huge, oversize jeans, a backpack, and a baseball cap pulled down low. And she was running as if she were late for the school bus . . . Her whole aura was so completely rough-and-tumble 8-year-old that I wouldn’t have been surprised if she had a slingshot in one pocket and a frog in the other.

Whether or not it’s necessarily a bad thing to reject “adult” queer culture is debatable. There does seem to be a flexibility in gender roles that is refreshing: some bois date butches, some date femmes, some date other bois, some transition and use male pronouns, some remain female-identified. It’s become non-political in terms of feminism and homosexuality, but in terms of gender they seem to be filling the spectrum from male to female and bridging the gender gap.

The article seems to have found “one of each” bois with douchey views: one that uses misogynistic rhetoric like “bros before hos”, one that is against transgender bois, one that thinks boi-on-boi or butch-on-butch is gross and that likewise femme-on-femme is “air”, one that thinks “butch-femme” is stupid. They also found a femme who is fed up with bois because of her perception that they represent the feminization of butch women.

Maybe this is a product of too many conflicting expectations put on people within the LGBT community, and a young generation even less concerned with rules and politics than their predecessors. The biggest take-away from this article for me was this subculture is about subverting the binary, generally: masculine-of-center dykes don’t have to be macho butch anymore, and male-identified people don’t have to medically transition anymore. But the other take-away is that this culture is associated with exclusion, artsiness, youth, insolence, and lack of respect for others, which seems to do a disservice to non-binary people who are older, more political, more butch, more femme, more traditional, less traditional, less promiscuous.

This article never purported to seek out a representative sample of lesbians, but it never made clear that not all young LGBT people are like this and that this subculture is a luxury in cities such as NYC and San Fran where politics have become so progressive as to render gay rights virtually obsolete, attracting LGBT youth to a scene promising an escape from the gravity of being outsiders in a heteronormative world.

And at the end of the day, having a less-masculine-yet-still-potentially-male-identified subculture is awesome: people female assigned at birth who transition/don’t transition but identify as male don’t have to prove their masculinity? Awesome!! It’ll be interesting to see how this movement evolves with time and becomes more age-inclusive.

What are your thoughts?